Precondition: The settings are only accessible to team owners. Normal users (team members and guests) will not see the settings. 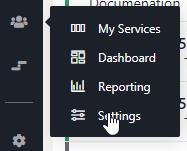 When the Nimbus Personal App is installed you can also access settings in the My Services overview. The overview is showing all the teams you are a part (and owner) of:

Some settings rely on resources, workflows and other entities which are created and managed via the Configuration. 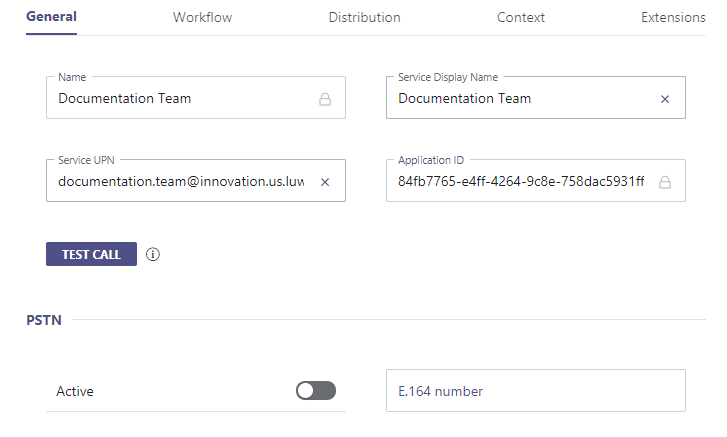 Contains functions that help with Nimbus provisioning or testing of your service, which is particularly useful when testing changes or connectivity.

Why are Service settings locked?

Full settings are are accessible to Tenant Administrators and part of the Nimbus installation procedure. Changes to these details require Tenant Admin consent to make changes and require a script to apply the changes. Refer to Nimbus Installation for further details.

As a Service / Team Owner you can see the following details. Entries marked with

require a (re)execution of a Provisioning Script. → See Note above.

A test call will directly call the Nimbus call-bot and establish a connection to your service. You can use this feature to test your workflows and/or distribution settings.

Please note that this feature will not test any PSTN numbers assigned to your service. To test a PSTN you need to call via cell phone or landline.

As team owner you can change your team name directly within Microsoft Teams (native, non-Nimbus functionality):

UPN and Service Display name changes are tied to Tenant Admin Consent and a Nimbus Installation provisioning script rerun which can take several minutes to take effect. Any change is therefore marked with a

Warning in the UI.

Note that any changes can have an effect on search discoverability / address books and directories that list the Service under its previous name.

This setting should not be enabled without subject-matter knowledge or prior Tenant Admin / Nimbus support contact consultation. Refer to the Installation Prerequisites for further info on PSTN / Number requirements.

Why is this necessary? Administration and licensing of PSTN numbers is outside of Luware control. Number assignment may result in additional set-up efforts and running costs. Get in touch with your Nimbus support representative if you need to change this setting anytime after your initial Nimbus deployment.

Allows you to apply the Opening Hours (outwards-facing status & reachability) of your service team.

Opening Hours entries must be created first to be applied here. Entries may be created as tenant-wide or team-only.

These values are mandatory Service Level Agreements to specify as they are integral part of your team's Reporting and the Nimbus Reporting Model KPI calculation.

Shows workflow related settings. Use the pull-down to choose any of the Workflows of your team.

Note that changing or editing any productive Workflow will immediately apply to your current service once you press "Save and Apply". In case of an incomplete or erroneous workflow this may cause interruptions to your daily service.

Some workflows can contain steps that create voice messages, e.g. shown within Adaptive Cards. Any Microsoft Teams channel within your team can be used, "General" being the default.

Nimbus chat bot will automatically post voice messages to the new channel, however existing messages are not transferred.

Note that these settings apply universally to all current or future users in this service.

Allows to configure settings that affect Nimbus service team users.  as they are invited to become Nimbus users.

Whenever you make adjustments to your Distribution we also recommend to check the following settings:

Please note that this a Enterprise Routing Feature.

Allows to configure additional information (codes, context) that may be shown alongside a service call.

By adding Context a separate URL (e.g. a CRM or Support-Tool) can be opened in additional browser tab.

Available items must be defined via the Conversation Context page as part of your Service Configuration.

Limitation: The Microsoft Teams client currently has no possibility / permissions to open extra Context-Tabs automatically, so your additional Conversation Context may not show.

Prerequisites for using this feature:

Note: Context defined here generally entries apply to all your team members, so all of them need access to the (outside) URL or system that you may define as context to open.

Allows Enterprise Routing users to specify Task Completion and Cross Selling codes to be stored during a customer interaction in the My Sessions view.

The corresponding TCC, CSC Widgets need to be enabled in → Extensions Tab (see chapter below).

Manages features such as the My Sessions tab and Attendant Console. Enabled features are immediately available to all Nimbus service team members.

Before you enable extensions

Please note that some extensions will only provide their full functionality when your license is expanded. Refer to Nimbus Features for an overview.

Enables Attendant Console in the menu, providing each Nimbus user in your team with an individual "Switchboard" for incoming call mangement and forwarding.

TENANT ADMIN Note that this option uses Address Books to be configured in the Configuration Administration (Admin of Nimbus).

Enables My Sessions in the menu, providing each Nimbus user in your team with an individual session history.

Note that this option requires Codes and Conversation Context features to be configured and applied for each service.

The My Sessions tab will only show contents during an ongoing call. → Once active this feature will be accessible all team members.

Allows to enable or disable available widgets in the My Sessions view. Useful when you want to reduce visual complexity or not want to use certain features (yet). 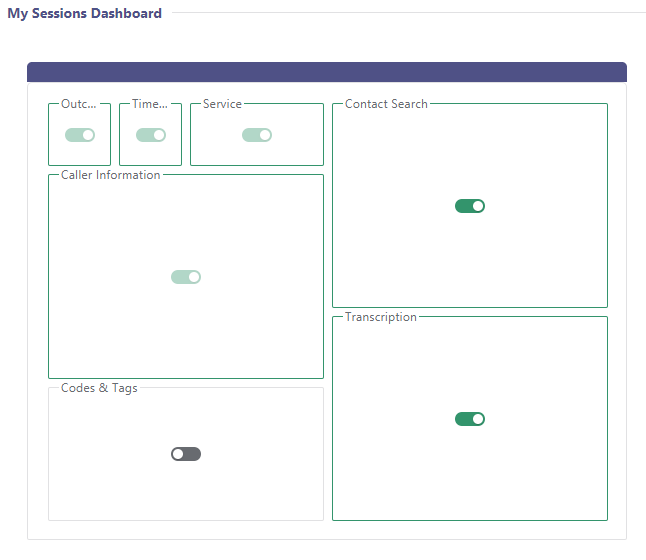